When the Cold War got hot season four

Welcome to When the Cold War got Hot, season four dealing with the military history of the Cold War in Europe from 1945 to 1956, will begin from Saturday 7th September, podcast episodes will about twenty minutes long and give a detailed account of the military or political situation involved.

Season four will began with a weekly ten part series on Greece, dealing with the Battle of Athens which the British Army fought a street to street battle with Greek Communist in December 1944 and January 1945 and then the Greek Civil War which lasted from 1946 to 1949 and was the largest military conflict in Europe after the Second World War until the Yugoslav Civil War. The Greek Civil War was a brutal civil war, where Greeks killed Greeks, it was fought between the western backed Government and Greek Communist.

The Greek Civil War produced the Truman doctrine which stated that the United States would back any Government fighting Communist aggression with money, arms and help with training but the fighting and the dying would be done by local troops not Americans. That policy would prove far more effective than the direct American military involvements in Korea and Vietnam.

The Greek Civil War would be one of the few success in the fight against Communist in the decade after the Second World War, when the Soviet established a empire in Eastern and Central Europe, the Communists won the Chinese Civil War and when Communist revolts would tie down the French in Indochina and the British in Malaya. As I will explain the Communist defeat in the Greek Civil War had more to do with Communist mistakes than the Truman doctrine.

After that there will be single or double episodes on the crisis over Trieste which nearly led to war between Communist Yugoslavia and the United States and did led to the deaths of American and Yugoslav serviceman. The Communist take over of Poland and Czechoslovakia. Stalin’s Berlin blockade, the attempt by the United States and Britain to foster a counter revolution in Albania which might succeeded had it not been that the British spy chief in charge was Kim Philby who was a Soviet agent. The 1953 East German People’s revolt and a short series on the 1956 Hungarian Revolution. 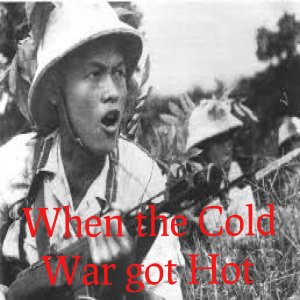