The Battle of the Bowling Alley where North Korean tank and infantry attack are been off by the Americans.  Further American reinforcements,  The placement of Koreans within American units.  The North Korean plans for their September offensive.

The attack of the North Korean 6th Division against the American 25th Division in late August 1950, including the fight for Battle Mountain.  The British Armed Forces during the Korean War.  A biography of Ernest Bevin, the British Foreign Secretary. 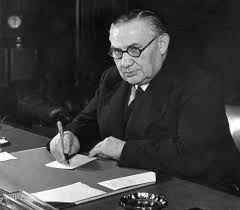 Used by the American Army, it was developed during the Second World War.  It had a crew of four, had a top speed of 89 kilometres an hour on road, it weighed about eight tons.  The main armament was a 37 millimetre gun and it also had two machine guns.  It was used in a reconnaissance role.  The main problem was that the armour was thin and could only stop small arms fire.  It was used in the Korean War but phased out of service shortly afterwards.

The Bren Light Machine Gun was used by Commonwealth troops during the Korean War.  It fired .303 inch bullets and could fire 500 rounds a minute.  It had an effective range of 550 metres.  It weighted eleven and quarter kilograms when loaded.  It was highly effective in breaking enemy infantry attacks. 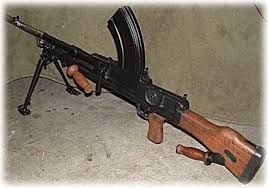 The Russian made gun was used by the North Korean Army during the Korean War.  It could fire both anti tank rounds and high explosive rounds.  It needed a crew of seven to operate it.  It had been heavily used by the Soviet Red Army during the Second World War.  The picture below is of a 76 millimetre gun captured during the Inchon landings.

This mortar was used at Company level to support the infantry.  It weighed 42 pounds and could fire three pound shells up to a range of 1,800 metres.  It was widely used during the Second World War, the Korean War and the Vietnam War.  During the Korean War it was used by both the American and South Korean Armies.

The Grenade is very useful weapon in night fighting and patrol action, it does not reveal the location of the man who throw it and can be deadly at close range.  The Chinese FM 23 Grenade had a ring pull cord which meant that when throw it would explode three seconds latter.  It could have a killing radius of up to 10 metres.

The podcast grows in terms of downloads month by month, with many new listeners joining us.  The total number of episodes for the Podcast series is likely to be 68.  The podcast series will end on Saturday 18th December 2016, just in time for Christmas, it will continue to be published weekly until then, I am currently writing the text for episode 57 so I am very confident of that.  There will be at least one episode will be for listeners questions about the Korean War, I will tell you how you may submit them nearer the time.

The North Korean 3rd and 10th Division cross the Naktong River and attack the American 1st Cavalry Division.  The Battle of Triangulation Hill.  American Air Force operations during the Battle for the Pusan Perimeter.  A biography of Major General Earl Partridge the commander of the American 5th Air Force in Korea.