The Eighth Army advance further to the north, however the Chinese Army are planning their fourth offensive.  The South Koreans and their American allies are defeated by the Chinese at the battle of Hoengsong.  However in turn five Chinese Divisions are defeated by the American 23rd Regiment and the French battalion at the Battle of Chiptongni.  The Chinese Offensive ends in failure.  A biography of Colonel Paul Freeman.

A map of the Battle of Chipyongni 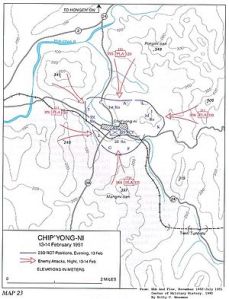